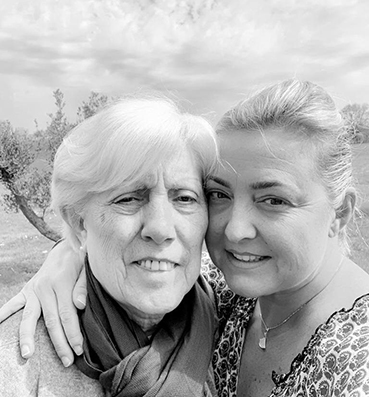 Below is the story of my journey so far of why and how I came to be learning about dementia. I hope you enjoy reading about it as much as I have enjoyed the study process.

Why did you choose to study Dementia?

I began to do research to understand dementia and more particularly vascular dementia three years ago, after my grandmother had several severe strokes. After five months in intensive care, she was able to go home but she is no longer the same.

As a clinical aromatherapist, passionate about olfactory therapy and aware of its capacity for stimulating emotions through smells, I swore to help her find some memories through smell. For that, the first step was understanding dementia, this gradual decline in mental capacity.

Dementia is not a specific disease but rather a general term used to describe a gradual decline in mental capacity. It influences intellectual and social capacities to the point of making daily life difficult. Dementia can alter memory, language skills, judgment and decision-making ability, lead to disorientation, and transform personality.

Dementia can be caused by a number of diseases affecting the brain, the most common being Alzheimer’s disease. Other diseases influencing the brain include vascular dementia, Lewy body dementia, frontotemporal dementia, and mixed dementia. The types of dementia differ according to deeper causes and can influence certain specific symptoms as well as their progression. Dementia has a profound impact on individuals, families and communities, posing significant challenges to quality of life.

Vascular dementia occurs due to decreased blood flow leading to the death of cells in the brain. This can happen when the blood vessels in the brain are blocked by blood clots or fat deposits, for example during a stroke. Vascular dementia constitutes between 15% and 25% of dementia cases. This disorder causes loss of mental capacity which can be sudden, gradual, or gradual and constant.

Lewy body dementia accounts for 5% to 15% of dementia cases. Lewy bodies are deposits of a protein that builds up in the brain causing mood swings, motility problems, and disturbances in thinking and behavior. This type of dementia usually progresses quickly and its symptoms often include the appearance of visual hallucinations.

Frontotemporal dementia is caused by a crack in nerve cells in two specific parts of the brain called the frontal lobe and temporal lobe. These alter language skills, personality and behavior.

Dementia can also have mixed origins, and particularly in old age. The most common mixed dementia is caused by a combination of Alzheimer’s disease and vascular dementia.

Diseases such as Huntington’s disease, Parkinson’s disease, and Creutzfeldt-Jakob disease could cause symptoms specific to dementia. Dementia can also have its roots in a number of factors that can damage the brain, such as alcoholism and drug use.

Some cases of dementia may be reversible or may get better after the cause is treated. Unfortunately, when dementia is caused by conditions such as Alzheimer’s disease, brain damage, or changes in blood vessels, the damage is irreversible.

Sometimes we forget where we left our car keys, or we tell the same story again to a friend or family member. These behaviors are usually explained by information overload due to an active and stressful life, and are not necessarily signs of dementia. As people get older, their memory sometimes functions differently. For example, our brain processes information it receives more slowly as we age. This type of change is normal and does not interfere with daily life. Dementia is, on the contrary, disabling, and is not attributable to the normal ageing process.

Although dementia manifests itself differently in everyone, the most common symptoms are:

Before a person is diagnosed with dementia, their symptoms must be so severe that they affect their independence and ability to perform the tasks of daily living.

At the end of 2018, I shared my research with a doctor friend, who confirms the seriousness of WICKING Dementia Research and Education Center to help me begin to understand Dementia. Her recommendation emphasised “starting to understand”; and with this in mind, I enrolled in the “Understanding Dementia” Program with the University of Tasmania and WICKING Research Center. The program started in February 2019 for 7 weeks with 3 main modules: The Brain, The Disease, and The Person. These 7 weeks passed in a snap.

With the ageing of the world’s population, Dementia is a major public health issue. After this first course, the question was: “Is it possible to modify the risk of dementia?” Since 2019 and the end of the Understanding Dementia program, I have been living closely with a person suffering from depression. These factors pushed me to start the second part of the course…

So in October 2020, I decided to enroll in the  “Preventing Dementia” Program. Preventing Dementia is a Massive Open Online Course (MOOC), offering university-quality education about the latest research in dementia risk and protective factors – I was not disappointed.

With four in-depth modules: Can Dementia Be Prevented?, Dementia Risk – It’s Not All in Your Head, A Healthy and Active Mind, and, Interventions for Prevention, I’ve learned that a substantial proportion of risk is associated with advanced ageing as well as genetic risk factors, but the latest research has indicated there are factors we can modify which may decrease our susceptibility to dementia.

The Wicking Dementia Research and Education Centre (WDREC) is unique in Australia as an integrated dementia centre that is active across a range of disciplines, seeking to improve the lives of people with dementia and their carers. The WDREC aims to:

These 2 programs have fascinated me and I seriously think of continuing to deepen my knowledge with a diploma in dementia care, to be able to intervene in specialized centers, to support individuals with dementia by combining my expertise in clinical aromatherapy. Don’t hesitate to read up on the disease, keep learning.